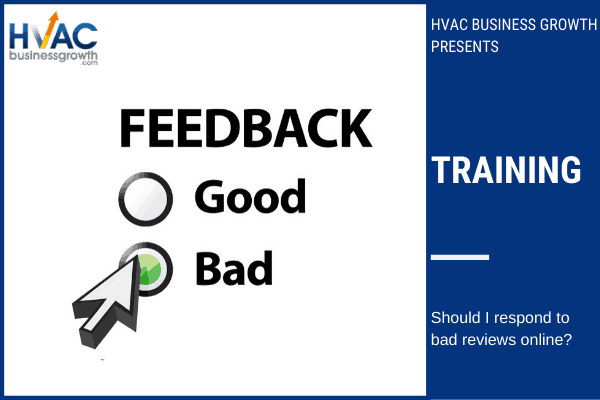 Training NickDecember 13, 2019January 31, 2020No Comments on Should I respond to bad reviews online?

Hey guys, Nick here from HVAC Business Growth. Thank you very much for watching the show. In today’s video, we’re going to talk about reviews and whether or not you should respond to any of those one, two or three star reviews that you might sometimes get on the Google Maps. It’s a hot topic, pretty controversial as usual. Let’s get stuck into the show.

Should I respond to bad reviews online? So yes, there are many reasons that you should do it. So, first of all, it demonstrates a customer-centric approach. So, whether the reviews good or bad, you should always get into the habit of actually responding to the reviews. So, be gracious, be grateful that somebody took the time to actually leave a review and acknowledge every review that comes in. So, just make sure that it’s not always just the squeaky wheel that them that gets the grease.

Let’s dig into this a little bit further. So, if you have a Google Maps account or a Google My Business account and you’ve got lots of reviews on there, that’s going to be a good thing for you. So, a lot of customers, when they are reviewing a buying decision, will actually look at some reviews online.

This can work in your favour. So, if the customer is researching and they see some reviews on there and they’re all five-star, that’s great as well.

But if they see that you’re a four star or four and a half star company and there are some bad reviews, but every bad review has actually been acknowledged and dealt with, that’s actually going to be a good thing. That’s going to work in your favour because the customer will see, or the prospect will see, that even if they didn’t get the result that they want, you are going to go out of your way to fix it. So, that’s actually really important.

And the other thing as well is that when people are leaving reviews, if they see that something is going to happen or they’re going to get called out, they might think twice before actually posting it.

A lot of people on the internet will just write stuff randomly and they won’t actually think about the consequences of it, so if somebody is thinking about posting something on your Google Maps page or your Google My Business, and they see that there’s some responses coming through, they might actually think twice about doing it.

Sometimes having protection for the customer and being accountable when you make a mistake might actually mean that you lose money on a job but that’s okay. That’s okay. It might cost you an extra $200 or $500 to make something right and get it fixed. But, trust me, the benefit that you get from having positive reviews online will far outweigh the $200 or the $500 that you had to spend to make it right.

Let’s just go through a couple of scenarios that are likely to come up and some responses. So, first of all, when somebody leaves a review before responding to it straight away you need to do some investigation, some internal investigation. So, what you can do is look at the person’s name.

This is from a Google My Business listing here. So, this is the person’s name, which is Sayad, and I’ve actually blacked out the last name just for privacy purposes. So, you can click on that link that is the person’s name and in your Google Maps listing and this will actually take them to basically that customer’s particular page, and then, it will have a record of all the reviews that they’ve left on Google properties over the internet.

What you can do is actually see what type of person this is. Is it a fake profile? Because sometimes people are out there leaving fake comments trying to sabotage your rankings and your online reputation. So, you need to do some investigation into the person to actually figure out whether it’s a fake profile or not, because this actually happens more often than you think.

If it’s a real review and you’ve done an internal investigation and you figured out that, yeah, this is actually a real problem, then you need to respond. So, this is a templated response that you can use, but I urge you to actually customise this all the time because nobody wants to hear from a robot, do they?

It’s, “Hey, first name. This is Nick from HVAC business Growth.” You just obviously change that up as you need to. “I’m sorry you had a bad experience with us. I’m going to see what we can do to fix it. Expect to hear from me in the next one day, two day,” whatever it is, “and we’ll make this right. Thanks from Nick.”, or your name there.

There’s a couple of key elements in this. Make sure that there’s zero confrontation in it. You’re not going to confront anybody through our review on the internet. Just let’s get that clear. Next, you’re 100% accountable for what’s happened. That is really important. And then, you are creating a time frame that you are going to reach out to them.

If you say you’re going to do it in one day, make sure that you’re on the phone, or email, or whatever the contact method is in the next one day. I would suggest doing it via phone and what you actually find when you contact people via phone after they’ve left a bad review, it’s normally never as bad as what it is. A lot of paper will back down a bit and you’ll be able to fix it a lot quicker. Yeah.

Move onto the next scenario and that’s the fake person response. So, this is what happens if you feel that the profile is a fake profile, maybe from a competitor or something, or maybe you’ve gone and backtracked through your own records and the profile name doesn’t actually match what you’ve got in your customer relationship management system.

This is what you’re saying. You say, “Hey, first name, this is Nick from HVAC Business Growth.” Again, just change things as you need to. “I’m sorry you had a bad experience with us. We’ve checked our records and can’t find a job matching your profile name. Could you please reach out to us on your phone number and we’ll make this right. Thanks, your name.”

The key element is this: You’ve acknowledged that had a bad experience. Again, there’s not confrontation in the message. And then, you’ve basically just said, we can’t find your details, which is calling them out, right, but it’s in a very subtle type of way. You’ve left your phone number there and you’ve stated that you’ll do anything you can to try and make this right.

If it is a real review and they want to get it fixed then they’ll reach out, but the key thing is here that you’re holding yourself accountable and you’re acknowledging that something bad has actually happened. So, that’s how you’d respond to a fake review.

And obviously, the slide earlier was how you’re going to respond to, again, that’s a real review but it’s not a positive one. So, I would make it practise of just responding to all reviews that come through. It’s good for your profile anyway, making sure that you’re getting lots of, I guess, engagement rather than just people leaving reviews and nothing’s actually happening.

Should I respond to bad reviews online? 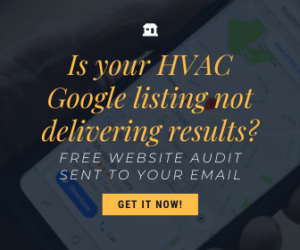