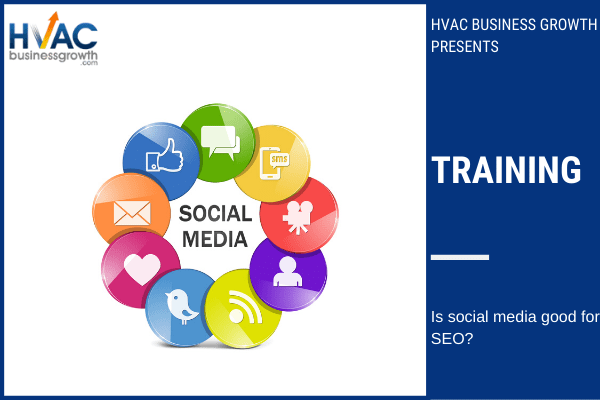 Hey everyone, Nick from HVAC Business Growth, thank you very much for watching the show. Today what we’re going to talk about is whether social media is actually good for SEO? So it’s important to realise that these two topics compliment each other. They’re not mutually exclusive. So lots of meat in today’s video, let’s get stuck in.

All right, so is social media good for SEO? So there was a time going back maybe five years ago where you could rank a website in Google without any social media profiles or social media presence. Those times have changed because Google looks at, it looks at your business as an entity so they want to see a brand, they want to see something that’s existing just outside of your particular website. So Google try very, very hard to get a much bigger, a larger picture of your business. And this favouring of entities is a real reason why Google tends to favour big brands. So you might be super, super relevant for our particular query, but you’ll still say some much bigger heating/cooling brands that are ranking quite well, they might do plumbing or electrician services and all sorts of stuff. They’re a bigger brand than what you are, so that’s why they can have … that’s why they can rank with ease.

The big thing about the social media side of it is that it can create a viral and popularity effect. So one of the things that Google is looking for when they’re ranking a site, first of all, they want to see whether it’s a legitimate entity, and then what they want to say is the popularity of the site. So does the website have some social media interaction? Does it get shared? Are they posting some regular content? That sort of thing. It’s not any one thing in particular, but Google is just looking for a large variety of signals to help them with their decision to rank.

It’s important to remember though that just by doing social media, just by having your Facebook, your Twitter, your LinkedIn, the Instagram account, those sorts of things, doesn’t mean that you’re automatically going to rank. And it also doesn’t mean that just by posting one post a day, it doesn’t mean that you’re going to rank as well. It will help, but you still need to have solid SEO principles in place. So you still need to think about some keyword research, making sure you’ve got your keyword in the appropriate place in the content that you’re trying to rank. So things such as the title, the description, the header tags, those sorts of things, making sure that you’ve good content on the site. So you might have to have videos, each page might need a thousand plus words depending on what your competitor’s doing. But just making sure that your content is good and you’ve got all your SEO principles in place.

When you do that, when you have good SEO principles and you are popular, you’ve got social media presence, that’s when you’ll find you start to rank, rank quite well. And you’ll start to show up for key phrases in Google that you’re not necessarily trying to rank for, just you’ll get this viral popularity type of effect and Google will trust your site so you’ll rank higher in the search engine. So that’s a resounding yes, social media is good for SEO, it helps to build the brand and build out the entity and it builds trust in Google’s eyes. So hopefully that makes sense to you. Appreciate you watching the video. Thank you.

Is social media good for SEO?