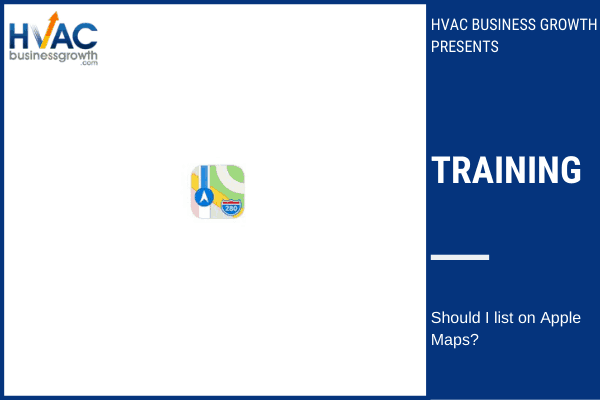 Hi, guys. Nick here from HVAC Business Growth. Thank you very much for watching, and in today’s video, what we’re going to talk about is Apple Maps and whether you should get your business listed in Apple Maps alongside your Google Maps listing. It certainly does help. As usual, there’s lots of details. Let’s get stuck into the show.

All right. So to redirect the question. It’s should you list your HVAC business on Apple Maps? So as I probably gave away in the introduction, you certainly should. So let’s go through some of the informations. Apple, basically, in a digital war with Google at the moment, in case you haven’t noticed. Apple are a massive brand and they’re massive mobile brand. So of the seven or eight billion people we have in the world, there are 1.3 billion active Apple devices worldwide. So that’s a massive percentage of people have Apple phones or Apple mobile phones. So out of those iOS users, three quarters of those actually utilise Apple Maps over Google Maps.

So just remember that when somebody has an iPhone, the default map package that they use or app is actually Apple Maps. It’s not Google maps. You’ve probably noticed in the last few years, Google have a really, really big push to try and get into that phone market that Apple just absolutely dominates, at the moment. It’s a big deal. It’s a big deal. So remember, by default, three quarters of iOS users actually utilise Apple Maps. So this is why you need to get on Apple maps really, really quickly.

And the other thing to consider is that Siri voice search is also part of Apple, as well. So if you have a listing on Google Maps, then Siri is going to start pulling your business information when recommending businesses. So you kind of know how it goes, right? You’re sitting on the couch and something’s wrong with the air conditioner and somebody will pick up that phone and say, “Hey Siri, who’s the closest air conditioning business to me?” And then Siri will go, hopefully, and pull your business information. So you’ve got to get listed on there. It’s absolutely critical. So voice search is getting bigger and bigger and bigger. And if you’re on Apple Maps, then Siri will hopefully send some business your way.

And finally, the customer insights that you can get through Apple Maps are very, very good. So if you consider that people that are using Apple Maps, actually have an Apple ID and they’re using their phone all the time, apple knows a hell of a lot of information about the person that is actually searching and using their device. So by using Apple Maps, you get your customer insights dashboard and you can find some great information on there that’s going to help you to understand your customer and help you to market your business.

So this is what you should do, right now. So go to mapsconnect.apple.com, get your business on there. So there is a chance that through some other data aggregators, you already have a listing on there, but it might be unverified. So regardless, what I want you to do, right now, is go on to mapsconnect.apple.com and either verify your business or start your listing process, right now. Absolutely vital that you do that. So get listed, right now. I don’t think I’ve been as forceful in these HVAC SEO questions before. It’s imperative, right now, that you go and get your business listed or verified or an Apple Maps.

So thank you very much for watching, and we will see you in the next video.